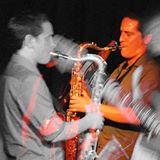 Lior Milliger, an Israeli born Saxophone player and composer brings his life experience to his music. In recent years Lior has been exploring contemporary composing methods and musical languages which he incorporates into his own music. Studying with figures such as Vyacheslav Ganelin and Albert Beger at the JAMD expanded Lior's musical horizons towards these directions