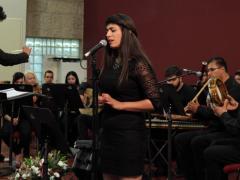 From Russia to Yemen, from Vienna to Cairo, from the Lebanese singer Fairuz to the Yemen-born Israeli singer Shoshana Damari, and from Mozart to Scheherazade, the Mendi Rodan Symphony Orchestra and the Jerusalem Symphony Orchestra celebrate the blurring of musical boundaries and creates an inspiring intercultural dialogue.

The Jerusalem Academy’s Oriental Music Department will perform the overture to Mozart’s opera The Abduction from the Seraglio, with an arrangement in Arab musical style created especially for the Israel Festival by Professor Taiseer Elias. The members of the department will also perform Nikolai Rimsky-Korsakov’s symphonic poem Scheherazade, which uses elements of Arab music in a Western musical context.

A rare opportunity to experience an extraordinary combination of musical styles carefully crafted by the most gifted of arrangers and performed by the best artists in the world of Israeli classical music.