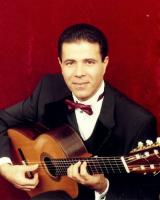 Yoram Zerbib, born in Israel in 1965, began his guitar studies in the Ashdod (Israel) music conservatory, later on when he was 15 years old he was accepted to the class of Joseph Urshalmi (teacher at the Music Academy in Jerusalem). In 1986 at the age of 21 he moved to Paris and began his studies under the famous Spanish Maestro Alberto Ponce in the Alfred Cortot Ecole Normale of music in Paris, which he later graduated from (Diplôme Supérieur d'Exécution).

In 2002-2003 he was sent abroad by the Culture Department in the Foreign Affairs' office on a concert tour, during which he played as a soloist with various orchestras such as the Mexico Philharmonic and Chamber Orchestras, the Nini Novgorod Kremlin Orchestra in Russia, the Tbilisi Chamber Orchestra in Georgia, the Philharmonic Orchestra of Odessa in the Ukraine, and the Commits Quartet in Armenia. He also gave recitals, and master classes. All together he performed in Russia, the Ukraine, Georgia, Armenia, France, Italy, England, Germany, Mexico, Guatemala, South America, Mozambique, and Botswana.