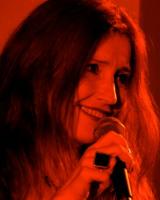 Hagit’s love for Big-Band Orchestras had lead to inevitable collaboration and performances with different Big-Bands: Pasternack Big-Band (Germany), Tel-Aviv Big-Band, Haifa Big-Band, Hollon Big-Band, Hod-Hasharon, ClubHed and more…,
Along with her jazz career, Hagit had also played lead roles in the musical "Hair", in the musical "Oklahoma", and in the original musical "Toledo's Girls", and played singing-roles in the theatre plays: "Torch song Trilogy", "Picnic in Husmassa", "Uts Li Guts Li”, and more.

Along her stage performances- Hagit had performed on different TV shows and Radio stations in the country and in the European Radio station- NDR, including a live broadcast of her recent show ‘’Love In Jazz’’.

Hagit Goldberg is a "Berklee College of Music" graduate, has a B.A. in Theatre Studies at "Tel-Aviv University", and sees her goal as an Artist and Educator. She had taught at “Beit-Zvi Acting School" and along being an academic staff at the "Jerusalem Academy of Music and Dance”,she also teaches at ‘’Rimon School of Music’’.