Gold and silver medals for the Ankor Choir at an International competition in the USA
9.8.2012 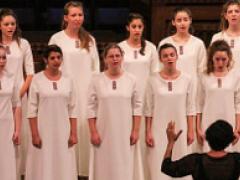 The Ankor choir won a gold medal in the Youth Choir category and a silver medal in the Sacred Music category at the international choral competition – The 2012 World Choir Games – which took place in Cincinnati, Ohio. More than 350 choirs from over 70 states including some 20,000 singers took part in the competition.

The Ankor Choir, conducted by Dafna Ben Yohanan, was founded in 1983. It has 40 girls ages 11 – 18, out of which 25 took part in the tour. The choir performs extensively in Israel and abroad, in concerts of its own, with leading orchestras and in national ceremonies and events. It is the resident choir for the Israel Philharmonic Orchestra with which it performed in operas and in works from the classical to the contemporary eras, under the baton of Maestro Zubin Mehta and many others (to see the letter of congratulations from Maestro Mehta to the choir following the win). The choir is also the resident choir for Yad Vashem, the institute for the commemoration of the Holocaust.

Ankor is the only Israeli choir that took part in this competition. The Israeli choir, known for its outstanding achievements received special attention from the media. The conductor and several of the girls were interviewed deveral times by the press and by local TV stations.

A recording from the competition : The choir performing An Immorality by Aaron Copland


The choir performed before a varied crowd, at the Mayerson Jewish Community Center (together with a Polish choir and an American choir), in two synagogues and a local Baptist Church, and was hosted by several members of the Cincinnati Jewish Community. The Academy's budget comptroller, Gad Levin, accompanied the choir and assisted with its various activities in the competition and with the Jewish community.

The entire Jewish community received the choir with a warm embrace. The Cincinnati Jewish Federation, directed by CEO Shep Englander and the community emissary Yair Cohen, accepted responsibility for the funding of the choir's flights and stay during the competition and during its concerts.


The choir toured the Center for the Holocaust and Humanitarian Education in Cincinnati, and at the end of the tour performed for the Museum's staff. The choir also received an initation from a Polish choir ,Vox Juventutis, to participate in a ceremony dedicating a synagogue in the Polish city Plock. The synagogue will serve as a museum for the community which was destroyed during the Holocaust.

The Choir at The Center for Holocuast & Humanity Education (CHHE)


The Academy family congratulates the choir on its success and wishes it many more wins in the future !

A spontaneous celebration of the choir girls