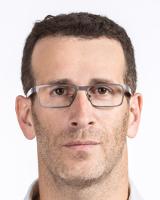 A native of Israel, clarinetist Gilad Harel is an avid chamber music player, a new music promoter and an active klezmer/world/pop music performer.   Gilad Harel performs as a soloist in Israel, Europe and the United States.

He has appeared with the Geneva Camerata, the Torino Philharmonic Orchestra,  the Jerusalem Symphony Orchestra, the Richmond Symphony Orchestra,  the Manhattan Sinfonieta, had an entire program as a soloist with the Geneva Chamber Orchestra, created a program called “l’Histoire Du Klezmer” for ensemble and electronics, performed at the Taipei International Festival for the Arts in Taiwan and played at the main stage of the Krakow Festival for Jewish Culture with the Sexteto Roberto Rodriguez (a group playing klezmer music with Cuban rhythms).

Living in Israel for the past 6 years, Gilad Harel is a member of the Meitar Ensemble, the artistic director of the Center for New Music Music at the Israeli Conservatory of Music Tel Aviv. He teaches clarinet and contemporary music performance at the Jerusalem Academy of Music and at the Buchman-Mehta School of music at the Tel Aviv University and was invited to open the unique cathedra for klezmer music at the interdisciplinary department at the Jerusalem Academy of Music.

Gilad Harel is a graduate of the Juilliard School, New York; the Conservatoire National de Musique de Paris; and the Israeli Conservatory of Music, Tel-Aviv.