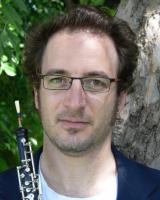 Oboist Dudu Carmel is a winner of the 1996 International Oboe Competition in Toulon, France and the 1990 François Shapira prize in Israel.
He serves as the assistant principal oboist of the Israel Philharmonic Orchestra, and as faculty member of the Winds Department at the Rubin Academy of  Music and Dance in Jerusalem.

He performed recitals in prestigious concert halls, such as the Chamber Music hall of the Berlin Philharmonic Orchestra, he recorded for radio stations in Europe and Israel and participated in chamber music festivals in Israel, Germany, Switzerland and Brazil. In 2004 Mr. Carmel made a critically acclaimed tour of East Canada, where he performed as soloist, played chamber music concerts and gave master-classes in Toronto, Montreal, Ottawa and Quebec - City.

Between the years 1992-1997, he has been the principal oboist of the in-house orchestra of the New Israeli Opera and since 1998 he has been playing as a guest oboist with the Budapest Festival orchestra.

Mr. Carmel studied at the Rubin Academy of music in Tel-Aviv and received his KA Diploma from the Staatliche Hochschule für Musik Karlsruhe, Germany, as a student of  Thomas Indermühle.

Dudu Carmel is a founding member of the Israel Woodwind Quintet. He recorded label CD’s for the Israel Music Center, Camerata, Meridian, Centaur Records and DUX.