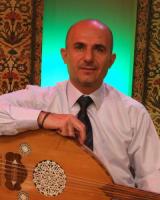 Dr. Michael Maroun, one of the foremost oud players in Israel, was born in 1967 and grew up in the village of Osfiya. As a teenage he took classical guitar lessons by Mr. Nathan Almosnino at the Haifa Rubin Conservatory and then by Prof. Yossi Yerushalmi at the Rubin Music and Dance Academy in Jerusalem. Later he took oud private lessons by Prof. Taiseer Elias. He completed all his academic degrees with excellence – his first degree (B.A.) at the Department of Oriental Music in the Jerusalem Rubin Music and Dance Academy, and his second (M.A.) and third (Ph.D.) degrees at the Department of Musicology in Bar Ilan University. During his studies he won prestigious awards and scholarships, including the Higher Education Board scholarship for excellent doctorands, an excellence scholarship by the Department of Musicology in Bar Ilan University, and a scholarship for Arab musicians by the Sharet Foundation.

Since 1998 Dr. Maroun has been one of the teaching staff in the Rubin Music and Dance Academy in Jerusalem, where he teaches oud lessons at the Department of Performing Arts alongside with theoretical courses on Arab music. In parallel he had been teaching in schools, coordinating and managing the music school of the Osfiya Community Center, lecturing and guiding concerts in many higher education and music educators' training institutions, conducting master's classes for Jewish and Arab student in and outside Israel, and a member of judge boards of the Sharet Foundation and in different music festivals in Israel.

In 2010 Dr. Maroun was appointed as a full-time lecturer in the Department of Oriental Music in the Jerusalem Rubin Music and Dance Academy and since October 2012 he has been serving as the head of the department.

Alongside with his academic activity, Dr. Maroun has been performing in a variety of musical ensembles (including the Nazareth Arab Orchestra, "Yadid" trio, "Alfarabi" trio, "Khomassi Hijaz Kar" and "Yossef Ve'Echad") in many concerts and festivals in Israel (including the International Oud Festival and the Israel Festival), Europe, America, Egypt, India and more. He has taken a part in many professional recordings in and outside Israel, including performing alongside with well-known Arab and Jewish singers, chamber and orchestral music, theater music and film soundtracks. He has taken a part in Israeli television production in the Educational Television and in the First and Second Channels, including a 10-part series on Arab music recently produced by the First Channel.