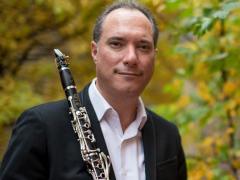 We would like to thank pianist Ms. Tania Stephanova for her gracious help as our accompanist for the event and Mr. Malachi Rozenbaum.