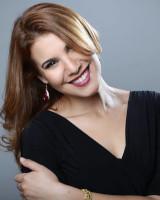 Born in Israel, started her professional career in the musical The Sound of Music.  Later on, after her triumph in Bravo Israel, she represented Israel in Italy’s Bravo Bravissimo, a highly-rated international child talent competition.
Spitz, a B.Mus. graduate of The Jerusalem Academy of Music and Dance, showcases a varied repertoire ranging from classical to popular music.

After her service in the Israeli army as a solo singer, she started performing in official ceremonies, at the Israeli government, the presidential residence, and The Hebrew University of Jerusalem, among others.
Along her concerts throughout Israel, Anna represents her country in leading musical projects abroad: concerts with symphonic orchestras, big bands, and special international collaborations.

In 2016 recorded the album “Song of Land” with Prof. Menachem Wiesenberg, for the Israel Music Institute. The album was invited as a live concert by renowned festivals and got rave reviews. In 2017 she was invited by the Israel Philharmonic Orchestra to sing as a soloist in an opera by the well-known Israeli composer Yoni Rechter.

Spitz dubbed leading characters in animated movies of the biggest film corporations: “20th Century Fox” and “Disney”: The Little Mermaid 2, Anastasia, Annaluise and Anton, and in 2019 she contributed her voice to the soundtrack of Jean-Claude Van Damme’s movie “We Die Young”.