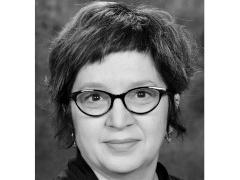 Jana Andreevska (1967, Skopje) is a contemporary composer, professor and artistic director in the world of contemporary classical music. She is the first female  Macedonian composer and one of the most internationally performed Macedonian
composers. She has earned both her BA and MA degrees in Composition at the  Faculty of Music in Skopje, where she has been also teaching since 1995.

Her pieces have been performed and recorded by herself and major  soloists and ensembles in Macedonia as well as throughout Europe. Her works have been published on CDs by SOKOM, Dresdner Tage der zeitgenössischen Musik, Peer Music, Zefir Records.

Jana Andreevska is an active member of many professional organizations such as the Macedonian Composers Association (SOKOM), a delegate of SOKOM in the European Composers Forum (ECF) and ECSA (European Composer and Songwriter Alliance), Chairwoman of the Artistic Committee of the ECCO (European Contemporary Composers Orchestra) from 2014-2018 and currently a Vice President of ECF and board member of ECSA. From 2008 to 2019 she has been directing the festival “Days of Macedonian Music”.

Her other interests include painting and translating fiction and articles on music from English and French into Macedonian. Translations include novels such as Michael Cunningham’s “The Hours”, Robert Coover’s “the Babysitter” and Marcel Schwob’s “Vies Imaginaires”.

The lecture covers the path towards shaping the composer’s musical identity, following the evolution of the individual language, the story of fascination with the infinite possibilities of variation and economy of means, of inspiration drawn from silence, literature and music history.