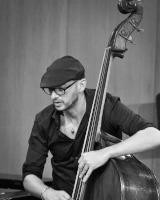 Barak Mori (Bass, Composer) has been one of the New York jazz scene's most sought after musicians since 1998. Born in Tel Aviv, Israel in 1975, Mori began playing the organ at age seven, and by the age of 13 was playing jazz on the guitar and electric bass. At age 15, in addition to his jazz studies, Mori began his classical training on the acoustic bass. By the time Mori had graduated from the Thelma Yelin School of the Arts he had already played professionally at the world renowned Red Sea Jazz Festival, and toured internationally with the Young Israeli Philharmonic Orchestra.