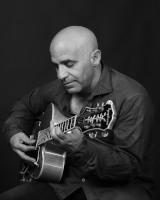 Born 1970 in Jerusalem, Israel Ofer began his musical studies with private teachers Justin London, Steve Peskoff and Jean Claude Jones. He completed his B.M. from Berklee College of Music while receiving numerous awards and scholarships including the American Israel Cultural Foundation Award, Stephen Hollander Award, Guitar Department Award and a Downbeat Magazine up and coming musicians feature. He continued his studies in a two year program at the prestigious Thelonious Monk Institute studying under many famed jazz masters such as Wynton Marsalis, Clark Terry, Jackie Mclean, Jimmy Heath and Jimmy Ponder. As part of the program he has traveled to India to represent the U.S. with his classmates along with Herbie Hancock and played in the King of Thailandʼs 60th anniversary celebrations with Wayne Shorter and Herbie Hancock. While at the institute he also completed his M.M. from the New England Conservatory of Music and received the Gunther Schuller Award.