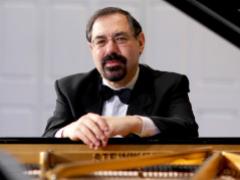 The artistry of Boris Berman is well known to the audiences of more than fifty countries on six continents. His highly acclaimed performances have included appearances with the Royal Concertgebouw Orchestra, the Gewandhaus Orchestra, The Philharmonia (London), the Toronto Symphony, Israel Philharmonic, Minnesota Orchestra, Detroit Symphony, Houston Symphony, Atlanta Symphony, St. Petersburg Philharmonic, and the Royal Scottish Orchestra. A frequent performer on major recital series, he has also appeared in important festivals, such as Marlboro, Bergen, Ravinia, Nohant, and Israel Festival, to name a few.

Born in Moscow, Boris Berman studied at Moscow Tchaikovsky Conservatory with the distinguished pianist Lev Oborin and graduated with distinction as both pianist and harpsichordist. He performed extensively throughout the Soviet Union as a recitalist and appeared as guest soloist with numerous orchestras, including the Moscow Philharmonic and the Moscow Chamber orchestras.

In 1973, Boris Berman left a flourishing career in the Soviet Union to immigrate to Israel. He quickly established himself as one of the most sought-after keyboard performers, as well as one of this country's more influential musical personalities. Presently, he resides in USA.

A dedicated teacher of international stature, Boris Berman has served on the faculties of the world's finest schools, such as Indiana (Bloomington), Boston, Brandeis and Tel-Aviv universities. Currently, he heads the Piano Department at Yale School of Music. He also conducts master classes throughout the world. In 2005, he was named a Honorary Professor of Shanghai Conservatory; and in 2013, a Honorary Professor of Royal Danish Conservatory in Copenhagen. In 2017, he was given a honorary title of "Specially-appointed Professor" by China Conservatory in Beijing.

In the spring of 2008, Yale University Press has published Boris Berman's new book "Prokofiev's Piano Sonatas: A Guide for the Listener and the Performer". This book complements, and is based on, his highly praised recordings of this repertoire. In 2011, Shanghai Publishing House has published a new bi-lingual edition of the scores of Prokofiev's piano sonatas, revised and edited by Mr. Berman. Based on manuscripts and first editions, this is the most authoritative edition of this repertoire available.