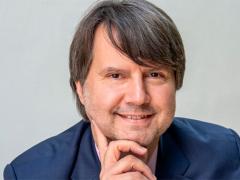 Prof. Laszlo Nemes, Director of the International Kodaly Institute of the Liszt Academy of Music in Hungary and Vice President of the International Kodaly Society. At the Liszt Academy and the Kodaly Institute he lectures in Kodaly’s educational philosophy, teaching methods and conducts the choir of the Institute.
As a music pedagogue and conductor, he has held workshops, master classes and seminars in Australia, Brazil, Canada, China, Finland, Greece, Ireland, Italy, Japan, the Korean Republic, The Netherlands, The Philippines, Poland, Portugal, Singapore, Switzerland and the United Kingdom several times. In 2012 he was appointed as guest professor and academic consultant in China’s most prestigious music educational institution, the Beijing Central Conservatory of Music.