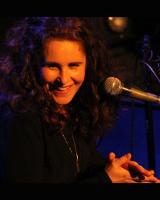 Ayala Asherov is a composer, songwriter and performer, born in Tel Aviv 1968.

Ayala’s music ranges from songwriting, to music in the concert hall, to multimedia including film, T.V. museum exhibitions and dance. After living in the US for over 20 years, her compositions were written and performed by many artists. along the years she published albums singing her own songs including Cycles of the Moon, an album dedicated to her origional chamber compositions.

Ayala conceived and produced the project: Music Tells The Story™ Together with the South Carolina Communities in Schools program, challenges public schools to help young students to creatively express themselves through literature and music.

She was also teaching songwriting at the College of Charleston.

Ayala’s songs are published and recorded by many celebrated Israeli artists such as Ofra Haza, Gali Atari, Arik Lavie and more, Her best known song, lyrics and music, “Le’Orech HaYam” (“Along the Sea”) was recorded by Ofra Haza and is still recorded and performed by singers and choirs around the world. As a singer she recorded with Arik Einstein and Yoni rechter and performed as an actress on Television Film and Theatre.