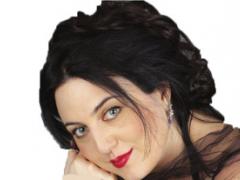 Anna Skibinsky debuted at the Teatro alla Scala in Milan in November 2004 as Olympia in Les Contes D'Hoffmann under the baton of maestro Gary Bertini and these performances brought her to the forefront of the new generation of opera artists. Ms. Skibinsky performed title roles at some of the most prestigious Opera houses and concert halls in the world including: New York City Opera as Adina in L'elisir d'amore directed by internationally acclaimed stage director Jonathan Miller, conducted by the music director of NYCO George Manahan and Nanetta in Falstaff for which she received a special excellence prize from the company.