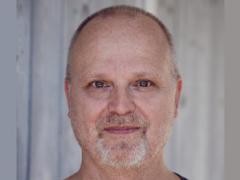 Thomas Kampe (PhD) has worked internationally as performer, performance-maker and educator for more than 30 years. Choreographic collaborations have included works with Liz Aggiss, Rosemary Lee, and an extensive exchange with theatre-director Julia Pascal. He works as Senior Lecturer for Movement for Actors at Bath Spa University. Thomas trained as a visual artist in Germany, studied dance at the Laban Centre in London and worked for 13 years with Austrian Ausdruckstanz-pioneer and Holocaust survivor Hilde Holger (1905-2011). He was awarded Associate Professorship (2011) at London Metropolitan University for developing a somatic-informed dance curriculum. He is a practitioner of the Feldenkrais Method ® which forms a foundation for his teaching, research and artistic practice. His research focusses on emancipatory dimensions within somatic-informed performance practices and pedagogies. Most recent publications include the chapters ‘The Art of ‘Making Choices: The Feldenkrais Method as a Soma-Critique’ (Triarchy 2015), and ‘Eros and Inquiry – The Feldenkrais Method as a complex resource’ (Taylor & Francis 2015).