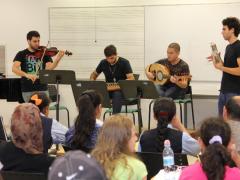 The summary session of the "Intercultural Musical Dialogue" course, under the instruction of Joseph Ouda and Hagai Bilitzky, was held on Tuesday, May 3rd, 2016. Throughout the course, pupils of three sixth grade classes from Beit Zafafa met pupils of three sixth grade classes from Beit HaKerem. JAMD students taught the students of both schools in combined classes, exposing them to musical notions and ideas expressed in compositions from both Oriental and Eastern cultures. In the final session, the schoolchildren sat in a concert of these compositions, and participated in combined group study sessions led by JAMD staff and students, where they discussed what they heard.