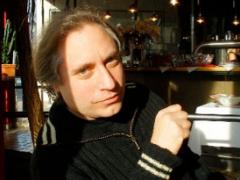 MATTHEW GREENBAUM was born in New York City in 1950. He studied composition with Stefan Wolpe and Mario Davidovsky and holds a Ph.D. from the CUNY Graduate Center.

His works are published by Tunbridge Music and the American Composers Alliance. Recordings are available from Antes, CRI and Furious Artisans; and an all-Greenbaum CD has been released on Centaur Records.

Greenbaum is also a video artist whose video and animation accompany theater pieces with solo voice. These include Rope and Chasm, an hour-long setting of excerpts from Nietszche’s Also Sprach Zarathustra; America this is Quite Serious on poems of Allen Ginsberg, and In der Zeit, on a poem of Paul Fleming. He also writes on the aesthetics of musical structure and is the author of numerous articles under the rubric “musical dialectic.” Greenbaum is a professor of composition at Temple University.