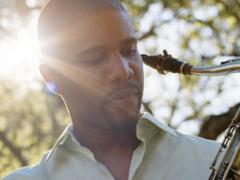 David Sánchez - Grammy-Award winning saxophonist David Sanchez arrives in Israel with a new performance that interweaves the colors and textures of the Caribbean, the rhythms of Africa, and the soul of jazz. Sanchez’s musical quest centers on the sounds of Haiti, Carriacou (anisland in the Grenadines), and his native Puerto Rico – alongside the West-African drum rhythms of Yuba, Calinda, and Sica. Seen through the eyes of a contemporary jazz musician, Sanchez has said, “I always knew there was a connection between their musical traditions and the music I grew up listening to in Puerto Rico, but the commonalities still amaze me.” Sanchez, who had the privilege of playing with Dizzy Gillespie, expanded the limits of traditional jazz with Latino and Afro-Caribbean traditions and sounds.