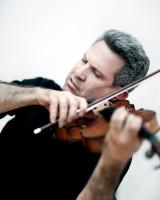 A graduate of the Curtis Institute of Music and the former Solo Violist of the Netherlands Radio Philharmonic, Zvi Carmeli performs through out the world as a violist simultaneously engaging in an intensive career as a conductor.

Carmeli has  performed as soloist with the orchestras such as the European Community Chamber Orchestra, the Netherlands Radio Philharmonic, the Concerto Soloists of Philadelphia, The New York String Orchesrtra, The Harmonices Mundi Orchetra Linz, the Salzburg Chamber Soloists and the Salzburg Kammerpilharmonie.
He was the founder of the SoLaRe String Trio - 1st prize winner of the Netherlands Impresaariat Chamber Music competition,  performing extensively through out Europe and the U.S.A. in venues such as the Concertgebouw Amsterdam, the Herkules Hall Munich, the  92nd St. Y New York and the Herbst Theater in San Francisco.
Carmeli has Participated in chamber music festivals such as Festivo-Finland, Rosklide "Schubertiade"-Denmark, Prussia Cove-Engalnd,  Amadeo- Holland,  Ars Musica- Belgium, Moab-U.S.A, Emilia Romagna-Italy and Kfar Blum-Israel. He has collaborated in performance with Violinists Vadim Repin, Benjamin Schmid, Hagai Shaham, Nora Chastain and Rainer Honek, Cellists Robert Cohen, Paul Watkins and Yehuda Hannani, Violists Rivka Golani and Vladimir Mendelssohn, Pianists Homero Francesch , Enrico Pace and Gianluca Cascioli, and ensembles such as the Amsterdam chamber music society,  the Fine Arts Quartet, the Budapest Accademica Quartet, and the Mendelssohn Piano Trio Berlin.
Carmeli has recorded a variety of chamber music for  Divox, Edel Classics, Ottavo, Ars Nova, Kontrapunkt and the KAM Amsterdam Concertgebouw series, along with recordings for Dutch, Spanish, German, American and Israeli Radio and Television productions.
Carmeli is a senior lecturer of Viola and Chamber Music teacher at the Jerusalem Academy for  Music and Dance, and also holds a position as chamber music teacher and conductor at the Universität der Künste (UDK) - Julius Stern Institute, Berlin. He regularly gives master classes at courses such as the Lenk Sommer Academie - Switzerland,  "Stage" -Spain, "Musica Mundi" - Belgium, "Peter de Groot" - Holland, "Viersener musiksommer" and "Holzhausen musiktagen"- Germany and the Jerusalem Music Center Summer Courses and "Itchak Perlman Project" - Israel

During the years as Principal Violist in Holland Carmeli studied the art of conducting at the Amsterdam Conservatory. Since 1996 He has been intensively involved in  conducting  large ensembles, chamber and symphonic orchestras.

In 2005 Zvi Carmeli was appointed chief conductor of the Universität der Künste - Julius Stern Institute Chamber Orchestra, Berlin - an orchestra with which he concertizes regularly in  halls  such as the Philharmonie Berlin and the UDK Grosse saal, as well as in tours through out Europe.
He is the Founder and Conductor of the Berlin Chamber Soloists, an ensemble comprised of a dynamic international mix of some of  Berlin's finest young Musicians. The BCS has performed in prestigious festivals such as Emilliaromagna, Le dieci giornate della musica Brescia and Festival delle nazioni, Citta di castello. In June 2006 The BCS performed a world premiere of  "Bach to me", a revisiting of  J.S. Bach 5th Brandenburg Concerto by jazz pianist and composer Cesare Picco. Followed by the release of the album "Bach to me" by the Berlin - Edel classics label. Carmeli and the BCS have collaborated with soloists such as Shlomo Mintz, Massimo Mercelli and Massimo Quarta.

Carmeli's activities have included  conducting the Soestenberg Festival Orchestra in Holland with violin soloists Julian Rachlin and Boris Kushnir,  collaborating with violinist Ivry Gitlis as soloist with the "Collegium Musicum" Orchestra at Tivoli Hall, Copenhagen and conducting a production of  "Pierrot Lunaire" by A. Schoenberg at the Tel Aviv Museum coupled by a National radio live broadcast from the Kfar Blum Festival.
He has conducted ensembles such as the Salzburg Chamber Soloists chamber orchestra at the "Chiari" Festival in Italy and the "Schubertiade" in Roskilde Denmark, the Caprizma Ensemble for modern music in Jerusalem and the Young Israel Philharmonic chamber orchestra at the Mann Auditorium Tel Aviv. In 2006 Carmeli conducted the Israeli Army Chamber Orcestra at the Palazzo Reale, Milano as a special event at the Omanut 2006 Exhibition in a concert celebrating Modern Israeli Composers.

In 2011 Carmeli will be a guest professor conductor of the Muenster musikhochschule, conducting the symphony orchestra.