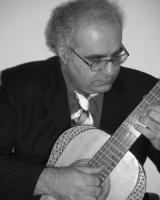 was born in Argentina and grew up in Italy. He studied at the Jerusalem Rubin Academy of Music with Joseph Urshalmi, and later with Charles Ramirez in London. While he was a student, he was accepted by the late Andrés Segovia as a private student, and soon after he won first prize in the Francois Shapira interdisciplinary music competition. A few months later he was as a soloist with the Israel Philharmonic Orchestra, with which he performed the Israeli premiere of  the Villa-Lobos concerto for guitar and orchestra. He was subsequently invited by the Beer Sheba Sinfonietta to play Rodrigo’s Concierto de Aranjuez, by Camerata Rehovot (nowadays Camerata Jerusalem) and by other orchestras as well.

In addition to several recordings for the radio and television, Schryer regularly performs in recitals and chamber music concerts in Israel and abroad, including musical centres including Paris, Salzburg, Berlin, Munich, Brussels, Milan and Zürich etc. He has also been invited to give masterclasses in France, Germany and England.

He was the founder of the Classical Guitar Department at the Israel Rubin Academy of Music at Tel-Aviv University and nowadays he teaches at the Jerusalem Rubin Academy of Music. He also is the artistic director of the International Guitar week at the Tel-Aviv Museum. A highly praised CD dedicated to the guitar works of Villa-Lobos and performed by Schryer has been recently released.