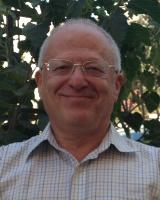 Composer, musicologist, pianist and teacher, Vladimir is an innovator in any field he deals with. He developed in his music among many other means, new types of compositional palindrome processes, integrating asymmetrical means.

As a musicologist Vladimir Scolnic has built an authentic method of research in contemporary music using also concepts from the Sets’ Theory.

As teacher he invented several innovative methods and systems related to different disciplines, which highlight the Jerusalem Academy of Music and Dance as an academic place where the most advanced theoretical concepts are integrated with functional artistic skills in outstanding challenging ways. These ways are based on understanding and building the expressive significance of musical structures using proved instruments that can be applied in analysis, composition or performance of music.

About an aspect of his teaching Prof. Dan Buciu, rector of The National University of Music-Bucharest wrote:

“I would like to thank you also for the workshops you have done with three classes of students in presence of our Academic staff. The workshop revealed a highly professional and original method of Ear development, which impressed our Academic staff as well as our students by its functional approach to the musical structures of different musical languages and by the effectiveness of the demonstrated means”

He was invited to participate as member of prestigious national and international juries of composition in USA, Romania, Spain, Poland and Israel.

Various aspects of Dr. Scolnic’s music have been researched in doctoral dissertations written in Europe.