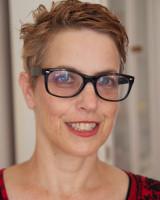 Her works have been presented at Dance Theater Workshop (NYLA), Danspace Project, the Joyce Theater, the 92nd Street Y Harkness Dance Series, the Knitting Factory, Merkin Concert Hall, DNA, Symphony Space, the Miller Theater, the Flea Theater, Joe’s Pub, Central Park's SummerStage and the Kitchen, among others; her company has appeared at the Israel Festival, the Krakow Festival, the Bytom International Festival of Modern Dance, the International Festival of the Arts (Costa Rica), Albania Dance Meeting Festival, and Belarus; She has received choreography fellowships from the National Endowment for the Arts and the New York Foundation for the Arts, a special choreography award from Bessie Schonberg, Dance Magazine Foundation grant, Meet the Composer award and numerous other grants; She served on the faculties of University of Florida (Associate Professor of Dance) and at Manhattanville College, Princeton University, Barnard College and the Frank Sinatra High School for the Arts and at the American Dance Festival.

Neta holds an MFA from Hollins/ADF innovative program, and an M.A. from Teachers College, Columbia University.  Her recent projects include a residency and performances in Salt Lake City, the 25th anniversary of her dance company at Dance Theatre Workshop (NYLA) in NYC where she premiered 2280 Pints! to great acclaim, a choreographic residency at Mercyhurst University in Erie, PA and showings of work in progress at the 92nd Street Y Out Of Israel, Festival this past January.   In the last several years Neta has conducted several choreographic residencies in Africa among them Ecole Des Sable in Senegal and in Ndjamena, Chad.  Neta founded and directed the Swamp Dance Fest! an annual international festival/creative lab at the University of Florida 2009-2013.  In its January 2013 issue, Dance Magazine featured a raving article about the Swamp Dance Fest!  and its unique vision.

Pulvermacher received the University of Florida College of Fine Arts Teacher of the Year Award in 2010 and the UF CFA International Educator of the Year Award in the fall of 2010.   Recent awards include:  2013 Florida Choreographers' Fellowship, Faculty Enhancement Opportunity award, and a fellowship to attend the HERS institute for leadership of women in higher education.   Upcoming projects include: a choreographic residency in Ivory Coast, Africa – a collaboration with choreographer Michel Kouakou, and the premiere of LUV (set to original music byDavid Broza to poems byPablo Neruda), Garden and Finish This One (inspired by Beckett’s Cascando).