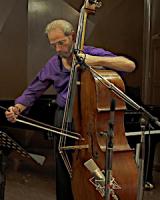 Michael Klinghoffer is the author of “Mr. Karr, Would You Teach Me How to Drive a Double Bass?” , a book devoted to the technique and philosophy of his mentor, Maestro Gary Karr.

Accompanying the book are 18 YouTube videos and a DVD, “For Teachers [NOT] Only”, recently published in the United States.

His repertoire ranges from contemporary music (much of it composed for him) to his own transcriptions that have been published in print and recorded on four CDs.

Michael is often touring as a bass performer and teacher, as a conductor and is a sought after lecturer.

Prof. Klinghoffer has earned a Master of Music degree from Yale School of Music and a Doctor of Musical Arts degree from the Hartt School, University of Hartford. He has also done Post Doctoral work at the Harvard Graduate School of Education.

Professor Klinghoffer has been at the Jerusalem Academy of Music and Dance since 1987, where in addition to his Double Bass studio he also conduced several orchestras, coached chamber music and taught classes on Music History, Aesthetics and Pedagogy. He has served as Head of the String Department, as Dean of Students (where he created the JAMD Community Outreach Program for which the academy received twice the Council of Higher Education Award), and as Dean of Performing Arts (where he created the Nazarian, Honors in Chamber Music Program). Currently he serves as Vice President for Academic Affairs.

He cherishes the things in life that he can not assign a number to, such as values, meaning, creativity and watching the sunrise from his garden.

As a teacher he believes that teaching is an ART and that the most important role of a teacher is to CONFUSE his students. He loves reading, (he only reads book that he has read before...), and he is a great Chess partner (he always loses). He is addicted to running , chocolate and espresso.

He is married to Varda, and they are the proud parents of Allon, Nurit and Yuval.

Prof. Klinghoffer strongly believes that talent is not a matter of geography. Along with his academic commitments and performing engagements, he devotes much time and energy to working with young people of diverse backgrounds in Israel and all over the world.