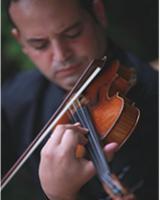 Between 2004 and 2008, Lihay Bendayan held the position of Professor of Violin at the "Conservatoire Supérieur et Académie de Musique Tibor Varga" in Sion, Switzerland.

From 2008 to 2015 he was a Professor of Violin at the HEMU, the Lausanne Music University in Switzerland where he elaborated a research project dedicated to the Tibor Varga Method of violin playing technique.

Since autumn 2011, Prof. Bendayan has held the position of Head of the Violin Class at the Jerusalem Academy of Music and Dance in parallel with his teaching position in Switzerland. In autumn 2014, he was appointed Head of the Strings Department at JAMD and between 2015 to 2020 served as Dean of the Faculty of Performing Arts.

Lihay Bendayan is performing in Israel and Europe as soloist and as chamber-musician and regularly gives lectures and masterclasses in prestigious academic institutions around Europe. His students, from around the world, are often competitions winners and hold international careers.

Lihay was the pupil of some of the most illustrious pedagogues of his generation, important representatives of very major violin schools: including Miriam Solovieff the american violin prodigy, pupil of Carl Flesch and Louis Persinger - who formed amongst others Yehudi Menuhin, Isaac Stern, Dorothey Delay and Ruggiero Ricci. He also studied with the Hungarian virtuoso Tibor Varga, with Michael Gaizler with whom he started his violin studies, and with Yair Kless.

Between the age of 9 to 13, Lihay Bendayan was the youngest and one of the last pupils of legendary professor Ilona Feher, the teacher of Shmuel Ashkenazy, Pinchas Zukermann, Shlomo Mintz, Hagai Shaham, Erez Ofer and others.

Noticed and followed by Isaac Stern since the age of nine, Lihay Bendayan was bestowed the "American-Israel Cultural Foundation” award for the a consecutive 10 years. He also completed his postgraduate degree from the Geneva Haute Ecole de Musique at the age of 17. He has appeared as a young soloist in Israel and in numerous European cities, including Switzerland, France, Germany, Italy and England (where he played his Debut Concert in the year 2000 in London at St. Martin in the Fields). He has played numerous concerts as soloist under the direction of Tibor Varga and his chamber orchestra, performing virtuoso pieces such as the Concerto no. 5 of Vieuxtemps, Paganini’s "Moses Fantasy” and others in various concert tours in Switzerland and around Europe and recorded the "Nigun" by Bloch under Varga’s direction.

In 2002, Lihay founded with his brothers Yoav (piano) and Iftah (cello) the Bendayan Trio which performed regularly during the following decade in prestigious concert halls and festivals, and was broadcast on television and radio around Europe and in Israel. The Bendayan Trio, launched by Agneta Lansing Artist Management in 2003, recorded the trios by Mendelssohn, Faure, Shostakovich and Rachmaninoff at “Fattoria Musica” in Germany. The recordings and concerts of the trio have been subject to passionate criticism:

"It's standing that the public had thanked the musicians for the gift that he was given and for the symbiosis with the music that it had felt, the virtuosity of the interpretation, and the intensity of the emotion. Nor notes, but a river of feeling which are difficult to express by words” (La Revue Juive). “Played with heart and soul into a trance” (Osnabrücker Neue Zeitung). “Their Shostakovich was so beautiful that tears almost dropped...” (Suddeutche Zeitung). “A public in a trance” (Grafschafter Nachrichten). “This ensemble has the particularity of being composed by three brothers and the osmosis between them gives to their performances a particularly special depth” (Le Nouvelliste).