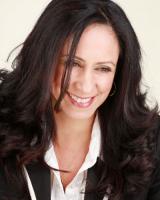 Appeared with the Cameri Theatre in leading operatic role in “The Rat Laughs”, written especially for her by with the Israel Chamber Orchestra, in Israel and abroad.

Appears regularly in evenings dedicated to celebrated poets throughout Israel.  Made a tour in Israel and abroad with the recital “Samba Classico” – Brazilian folk songs; and with the recital “A Night in Canaan”, accompanied by the pianist Jonathan Zack.

Mai Leshman-Israeli teaches voice training and interpretation at the Jerusalem Academy of Music and Dance, in the Cross-Disciplinary Music Department.  She is also a lecturer on behalf of the Ministry of Education in the following subjects:  the Israeli art song, voice development and voice instruction.

She teaches at the Givatayim Conservatory.  Also a   vocal  instructor of theatre  production like:  “Oriental Fair” with the Israel Camerata Orchestra; at the Cameri Theatre (for the musical “The Producers”); and at the Orna Porat Children and Youth Theatre.

Leshman also prepares students for matriculation and entrance exams for the Academy of Music, drama schools, military troupes and the IDF orchestra.