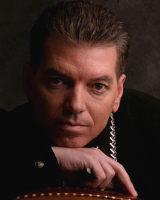 Born in Nazareth in 1962 from a well-known family for its artistic talents, Kamil started his musical career at the age of five singing brilliantly for Um-Kulthum and Abd El-Haleem Hafez. Critics nicknamed him “The little miracle”.
At the age of seven he started playing the oud and at the age of nine he won a scholarship to study classical violin for seven years at the conservatory where he graduated with excellence.

After completing his high school studies, Kamil won another scholarship to continue his musical studies in the United States of America. There he studied at CSULB in California where he got his B.A. degree as a classical performer.
He spent ten years in the U.S.A. During that time, he visited many states and performed in many concerts to acquaint the American public with various genres of Middle Eastern music. He also accompanied famous singers such as the great Tenor, Wadie Al-Safi, Sayyed Makkawi and others. On October of 2003 he played with the Lebanese star Fairuz.

Kamil is a multi-talented musician. In addition to playing the oud, the violin and singing, he is also a composer and orchestrator who has his own distinctive style. The first works of his compositions is "Embracing the Oud" (Du’abat Al-Oud) which he composed at the age of fourteen. Many of his works are written especially for the oud which emphasize the phrases of musical richness  and manifest the technical abilities and virtuosity of the player. Other works include "The Oud Prelude”, "Muqaddimat Al-Oud”, "Lute Duet" (Thonaae AL-Oud) and others. He composed two pieces for violin and piano: one is “sonata in C major”  and a "Solitaire Image" (khayal munfared) in A minor”.

He recorded two CDs; one included seven songs and the other six musical compositions and improvisations on the oud and violin.
He got his M.A. degree in musicology from Jerusalem University with distinction. At present, he  tours as a freelancer performer, teaches at the Musical Academy in Jerusalem & at the Arab Academic College for Education, and as a private instructor. Two of his students have won the first and second prize in the oud competition in Cairo/Egypt in 2003.