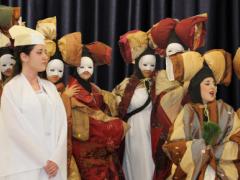 As one of the events of the Jerusalem Arts Festival, the Jerusalem Academy of Music and Dance is staging Claudio Monteverdi’s opera “L’Incoronazione di Poppea” (The Coronation of Poppea, libretto: Giovanni Francesco Busenello).

This Baroque opera is based on a historical event. The Roman Emperor Nerone decides to have his mistress Poppea crowned as Empress and to banish his wife Ottavia, all this against the advice of his tutor - the Stoic philosopher Seneca.

The opera plot was written for the Venice Carnival of 1643. The carnival was a festival in which roles could be exchanged – those between men and women, those between people of noble rank and the poor and between reality and fantasy; in this reversal of order, that which is forbidden becomes permitted and, from behind masks, human drives take over. The plot represents the triumph of love at the price of Seneca’s death and Ottavia’s banishment.

Below the love story there hides a tale of political impropriety addressing the manner in which Poppea managed to be crowned as Empress, a story of the surrendering of drives against Stoic philosophy and the attempt to limit the power of a government. The opera describes the struggle between morality and politics, or between drives and culture, and raises philosophical- and fundamental questions as, in each and every scene, a different mask falls and the naked truth is revealed from behind the motives of the characters in action.

As in many theater plays of the time, characters representing the lower classes play an important role in the plot: soldiers and servants provide the opera’s humor, but also the most sobering and sarcastic of messages.

The stage setting is a large bedroom; characters are dressed in blankets and pillows resembling the historical costumes customary till today at the Venice Carnival.