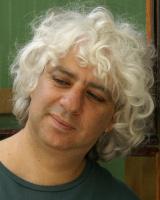 Born in 1961. Flutist since age eleven. Graduated from Thelma Yallin High School. In 1988 graduated from Berkeley College of Music and received B.A  in perfor-mance art. Played and recorded with the biggest music acts in Israel. Participated in Festival Israel special productions like ‘Romance is What Counts’ with Yoni Rechter, and ‘Rachel and Leah’ with Ahinoam Nini, as well as performing along Ester Ofarim and Yeudit Ravitz and many more. Performed in the annual Eilat Jazz Festival on numerous occasions.
1989-2017, TEACHER AT THE RIMON SCHOOL OF MU-SIC, RAMAT HASHARON

In 2005 Recorded in New York the album ‘Twists and Turns’ with the American pianist Kenny Warner.

2010 saw the release of the album ‘Wild’ which was recorded in Israel with Amos Hoffman, Nitai Hershkoviz, Gilad Abro and Amir Bresler, featuring the Bassist Avishai Cohen and Pianist Shay Maestro. The album was released in RAZDAZ records.

In 2011 received the Prime Minister Award for Jazz composers.