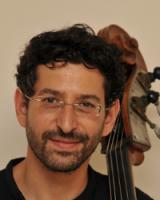 He performs and lectures regularly at international bass conventions and teaches courses in Israel and abroad.

Hagai devised a technique of playing the special elements of Middle Eastern music on the double-bass as part of his master's degree at JAMD under the guidance of Dr. Michael Klinghoffer and Prof. Taiseer Elias. This new technical approach makes it possible to bring the double-bass into prominence as a solo instrument in Middle Eastern and classical Arabic music and is taught by him in workshops for bass players and others around the world.

Hagai's background as a classically trained jazz musician and his own approach combining modern techniques and old performance traditions molded him into an innovative and unique musician.

As a performer, Hagai has recorded and performed over the years with acclaimed international and Israeli artists on the Arabic and Jazz music scenes. His collaboration with Taiseer Elias, "OudbassduO" is expanding both the limits of their instruments and the boundaries of classical Arabic music.