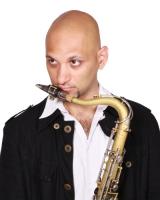 Saxophonist and composer Eli Degibri has established himself as one of today’s leading musicians in the jazz world and gained a fan base worldwide. Degibri is strongly committed to leading his own band and playing his original compositions, his unique songwriting voice has an appeal far beyond the traditional jazz audience. Degibri has recorded five albums: “In The Beginning” (2003), “Emotionally Available” (2006), “One Little Song” (2006), “Live At Louis 649” (2008) and finally, in 2010, his latest – “Israeli Song”. For this new album Degibri brought together two of his mentors, jazz legends Ron Carter on bass and Al Foster on drums, with the great Brad Mehldau on piano.

In addition to leading his own band, Degibri was fortunate to have worked with legendary pianist Herbie Hancock’s sextet (1999-2002) and legendary drummer Al Foster’s band (2002-2011). In January 2011 Degibri joined pianist Kenny Barron at the Red Sea Jazz Festival for a special duo performance. In April 2011 Degibri joined drummer Al Foster, bassist George Mraz and pianist Fred Hersch at Birdland Jazz Club in New York City for a week long engagement dedicated to the music of the late Joe Henderson. The quartet was also invited to perform at the 2011 North Sea Jazz Festival.

In October 2011 it was announced that Degibri, together with Mr. Dubi Lenz, have been chosen to become the new artistic directors of the prestigious Red Sea Jazz Festival, Israel’s most important jazz festival for the past 25 years.