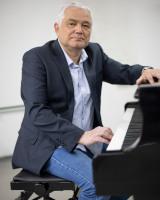 Karel Volniansky (Ph.D.) is a composer and musicologist. Faculty member at the Jerusalem Academy of Music and Dance. Research areas: Music Theory and Composition, Soundscape Studies.

He was the Head of the Music Theory, Composition & Conducting Department at the Jerusalem Academy of Music and Dance (2014–2017); Visiting Professor at the Faculty of Music, University of Toronto, Canada (2017–18); lectured at Berklee College of Music, Harvard University, The Rimsky-Korsakov St. Petersburg State Conservatory and other venues.

Recipient of the Israeli Prime Minister’s Prize and other prizes including the ACUM Prize for Anonymous Composition for Symphony No.1; The Tel-Aviv Philharmonic Choir Prize; The Audience Prize in the 1st Seoul International Composer’s Competition; The Klon Prize of the Israel Composers’ League; The Jerusalem Symphony Orchestra, IBA “Braun-Roger-Siegl” Prize for the Symphonic Composition.

Member of the Israel Composer’s League since 1993 (ICL, board member in 2006-8); the ACUM (The Society of Authors, Composers and Music publishers in Israel) since 1994; the Israel Musicological Society (IMS) since 2006.