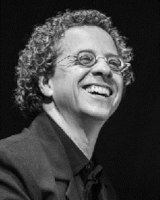 The Israeli pianist Dr. Ido Ariel is an accompanist, vocal coach, conductor and a lecturer, one of the leading figures in the field of Art-Song in Israel.

Between 2013-2017 he chaired the vocal department at the Jerusalem Academy of Music and Dance. Since 2012 he is the director of "Shira-Shir" concert series, presenting concerts dedicated to the classical as well as the Israeli art-song with prominent Israeli singers.

Ido has accompanied many acclaimed singers in Israel and abroad, directed 'Singing Words' art-song concert series at the Jerusalem Academy of Music and Dance, and artistically advised related concert-series. In addition, he served as a member of the musical staff at the New Israeli Opera. His activity as teacher includes lectures and master-classes in Europe, the US and Israel and many of his students have become distinguished singers.

Ido has won many prizes and awards during his studies in Beer-Sheva Conservatory, The Jerusalem Academy and the Royal College of Music, London, where he wrote a doctorate on the subject of vocal coaching and the songs of Schoenberg for voice and piano.