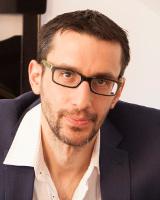 Leading orchestras, ensembles, and soloists around the world have performed the music of Israeli-based composer Amit Weiner. With an international career as a composer and pianist, Weiner’s music has reached vast audiences and achieved numerous prizes.

Amit Weiner was born in Jerusalem, and studied piano with Larisa Baikin and composition with Irena Svetova, at the Jerusalem Academy of Music and Dance High school.

Weiner has appeared as a pianist in his own compositions in concert tours all over Asia and America, included Los Angeles, Hong Kong, Macau and Vietnam, among others. His compositions, arrangements, and music for films and TV have been performed, recorded, and broadcasted across the United States - including New York's Carnegie Hall, and in England, Japan, Vietnam, Malaysia, Nepal, Ireland, Israel, Austria, and Hong Kong and Macau in China.

As a composer he is active in the fields of concert music, music for films, and popular music. His oeuvre includes over 40 chamber and orchestral works, among them two concertos for piano and orchestra, orchestral and choral works, chamber music, songs, and works for piano. His compositions have won numerous prizes and international competitions, including prizes from The International Trumpet Guild (USA), The Asian Composers League "15-minutes-of-fame" competition, Acum Israel, The America Israel Cultural Foundation, and more.

Weiner's music has been performed by the major orchestras in Israel, among them The Jerusalem Symphony Orchestra, The Israel Sinfonietta Beer Sheva, The Israel Camerata Jerusalem, and by leading ensembles including The Ariel String Quartet, Meitar Ensemble, Kaprizma Ensemble, and more.

In addition, he composed music for two full-length silent films and his credits for TV and films include titles for music libraries such as Gothic Storm Music (London), The Library of the Human Soul (London), and a documentary film by Rai TV (Italy).

He is also highly active as an arranger in the field of popular music and the Hebrew song repertoire, with over 80 arrangements for various ensembles including orchestral arrangements, some of those were printed on commercial CD's.