Community activity: the Ben-Haim Ensemble | The Jerusalem Academy of Music and Dance
Skip to main content 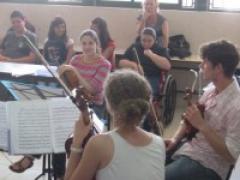 The Ben-Haim Ensemble, under the musical direction of Gaddiel Dombrowner, is holding explained concerts at the AMIT Gutwirth High School in Sderot for the second time this year. The idea of performing concerts in Sderot attracted Dudu Sela, a cello teacher at the Academy, who made the connection between the ensemble and the Association for Community non-profit organization: he liaised between the organization and the Jerusalem Academy of Music and Dance, making the concert performance a reality.

The Ben-Haim Ensemble was established in 2011, with the objective of performing the gamut of chamber music repertoire of classical music. The ensemble, comprising outstanding students and graduates of the Jerusalem Academy, has become the main performing body for chamber works written by composition students of the Academy. The ensemble bears the name of composer Paul Ben-Haim, who was an influential figure within the Academy.