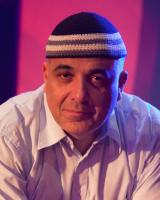 One of the most prominent and influential pianists and Jazz players in Israel, Winner of the 2007 Israeli Prime Minister Award for Jazz Composers.

As an autodidact, Adrian acquired most of musical knowledge independently. Nevertheless, Adrian was taught by well-known and well accomplished music teachers, such as: Mrs. Bat-Sheva Rubinstein, Mr. Claude Abravanel, and Mr. Mark Kopytman.
In addition, Adrian was in a friendly as well as professional contact with Joe Zawinul who provided him with important keys on real-time composition.

Served as a trombonist, pianist, music producer and a conductor for the IDF Orchestra during his service in the Israeli Army. A music professor and lecturer at the Jerusalem Academy of Music and Dance, at the school of Jazz & Contemporary Music Rimon and at the School for Contemporary Jewish-Israeli Music Mizmor.

As a unique interpreter in his field, Adrian has an extensive performance record as a soloist or in a variety of Jazz ensembles. His record includes concerts with some of the most accomplished Jazz players in the world, among them: David Liebman, Lou Solof, Eddie Gomez, Airto Moreira and James Moody

In 2004, he was invited to perform solo in the prestigious Festival of Israel. The performance was based on Hassidic hymns from the Polish town Modzitz and received raving reviews from the diverse audience. Today, Adrian performs solo or as a leader in his trio "Jewish Standards & Original Jazz".