The Academy bestowed pianist Elena Bashkirova with the status of “Honorary Colleague”
25.9.2014 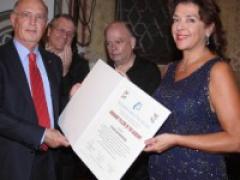 Alongside Classical and Romantic repertoire, Bashkirova is a devotee of 20th century music and has taken part in a number of world premieres. She is also a chamber music enthusiast and has accompanied some of the greatest singers. In 1998, she established the Jerusalem International Chamber Music Festival, remaining its artistic director. She has taken many concert tours of Europe and the USA with ensembles comprising important musicians of the festival.