Reconnections - The Art of Ensemble Playing in Jerusalem and Budapest

Reconnections - The Art of Ensemble Playing in Jerusalem and Budapest
19.2.2014 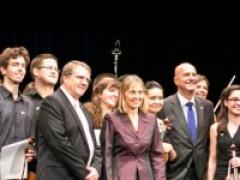 A few days ago a delegation of students from the Jerusalem Academy of Music and Dance came back from a concert tour in Hungary, held as part of the 25-year renewal of ties between Hungary and Israel. The students were all part of the Soraya and Younes Nazarian Chamber Music Excellence.

Looking back on the Reconnections-project »

The Project in Pictures »

The instructors who worked with the ensembles in Budapest were the Jerusalem Academic of Music and Dance staff members (Professor Lihay Ben Dayan, Mr. Zvi Carmeli, and Mr. Dudu Sela), as well as teachers from the Liszt Academy. The concerts programs included works by Israeli composers (Mark Kopytman and Yehezkel Braun), Hungarian composers (Leo Weiner, Bartok and Docnni), as well as Brahms strings sextet. During the second part of the program the students played two orchestral works: Symphony No. 25 by Mozart, Bartok Divertimento for String Orchestra.

Video of a Joint Concert:

The concerts were a great success and were widely covered by local media. The Jerusalem Academy of Music and Dance thanks  the Liszt Academy for the exemplary hospitality and hope the successful cooperation between the two institutions will continue to flourish in the future.