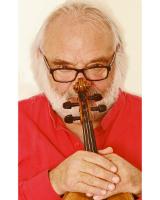 Moti Shmitt started his career as a soloist at the tender age of five in his native Lithuania with the Vilna Philharmonic orchestra. Mr. Shmitt is a graduate of the performance, conducting and composition faculties at the Moscow Tchaikovsky conservatory where he studied violin under David Oistrakh and Dmitri Tziganov; he is a top prize winner of the Paganini and M. Long – J. Thibeaud competitions. Considered one of the most versatile and well-known violinists in Israel, Europe and the USA, spanning flourishing musical career of more then 50 years.

After coming to Israel in 1973, besides assuming the position of Concertmaster of the Jerusalem Symphony Orchestra, a position he held for 26 years, Mr. Shmitt continued to tour Europe, the USA and South America as soloist and conductor with many leading orchestras and as a highly acclaimed recitalist and chamber musician.

Since 1974 Mr. Shmitt holds the position of violin teacher at the Jerusalem Rubin Music Academy, where he raised and continues to develop many of today’s leading young successful violinists in Israel and abroad, and as director of the string division, he introduced and developed many programs for solo and chamber music.

In 1974, Mr. Shmitt became a founding member of the renowned “Jerusalem String Quartet”, a group that toured all over the world and recorded much of the repertoire written in the 20th Century. In 1979 Mr. Shmitt founded the "Jerusalem Artists Orchestra". In 2007 he was appointed as the musical director and conductor of the Israel Plectrum Orchestra.

Shmitt himself writes chamber music, music for theater and orchestra.