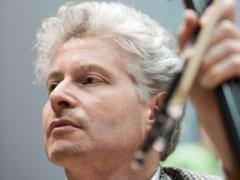 Robert Max enjoys a career that weaves together the threads of solo performance, chamber music, conducting and teaching. Currently heading towards a fourth three-year term as Musical Director of the Oxford Symphony Orchestra, Robert has also conducted the Covent Garden Chamber Orchestra, the Marryat Players, the Arad and Oradea Philharmonic Orchestras in Romania, the London Chamber Orchestra, the Oxford Sinfonia, the Kazakh State Symphony Orchestra, the BBC Concert Orchestra and many others.Robert conducted the Symphony Orchestra at Royal Holloway, University of London from 2001-2014. In 2001 he made the first of three annual visits to Tambov in Russia to conduct, give recitals and direct week-long chamber-music academies. As a mark of gratitude the Rachmaninov Institute awarded him the title of Honorary Professor.

Robert has performed in the Sangat Chamber Music Festival in Mumbai, India and at Domaine Forget in Canada. In 2010 Robert conducted the London Symphony Orchestra in a conducting masterclass led by Valery Gergiev. Robert was Musical Director of the Zemel Choir from 1994-8 with whom he recorded two CDs for Olympia and toured Israel in 1996.

As cellist of the Barbican Piano Trio for a quarter of a century, Robert has performed on four continents and recorded for ASV, Black Box, Dutton and Guildmusic. Robert was Musical Director of Pro Corda, the national school for young chamber music players from 1998 to 2000 and now coaches chamber-music at MusicWorks. He is principal cellist of the London Chamber Orchestra, a member of the International Board of Governors of the Jerusalem Academy of Music and Dance and President of the North London Music Festival.