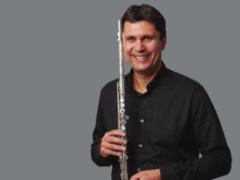 Vincent Lucas is currently Principal Flute of the Orchestre de Paris. At the age of 17 he became the first French winner of the international competition Concertino Praga (Prague) and at only 14 years old, he was selected to study at the Paris Conservatoire, having placed first at the competitive entrance auditions. He was one of the youngest flautists ever to have achieved this feat. After five years with the Orchestre du Capitole de Toulouse, Vincent joined the Berlin Philharmonic, one of the most prestigious orchestras in the world, and played with them for six years. As well as his career as an orchestral musician, Vincent's teaching activities have led to him giving numerous masterclasses both in France and abroad.