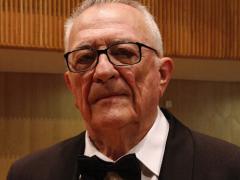 Mordechai Rechtman is a renowned bassoonist, conductor, arranger, teacher and educator. Together with his parents he left Germany in 1933 and came to Israel in 1934. Between 1946 and 1991 he was principal bassoonist with the Israel Philharmonic Orchestra. He began playing the bassoon at the age of 12 and was awarded first prize at the youth festival competition in Prague.

Mordechai Rechtman appeared as soloist with the Israel Philharmonic Orchestra and other leading orchestras in Israel and abroad, and in music festivals, such as Tanglewood, Spoletto. Marlboro, Vermont and the Pablo Casals Music Festival in Puerto Rico. He founded the "Israel Woodwind Quintet" in 1963 and the Philharmonic Woodwind Ensemble in 1976.

He also conducted large wind ensembles and orchestras in the USA, Canada, Mexico, Australia and throughout Europe.

While pursuing his career as a bassoonist, Mordechai Rechtman has spent much time writing transcriptions and arrangements for wind quintet, wind instruments and large wind ensembles. His unique talent as an arranger has been highly acclaimed. His arrangements, published by leading publishing houses, were played by orchestras and major ensembles all over the world, and recorded in the USA, England, Denmark, Germany, and Austria.

In addition to that, Mordechai Rechtman dedicates much time to teaching. He began teaching when still a young bassoonist, in his early twenties, and since then has taught generations of students. He also teaches other wind instruments and guides varied chamber music ensembles.

He has been Professor at the Rubin Academy of Music of Tel-Aviv University since 1969 until 2002, and as Guest Professor has taught in music schools such as the Juilliard School in New-York, the New England Conservatory in Boston, Massachusetts, The Royal Academy of Music in London, and the Geneva Music Conservatory.

Mordechai Rechtman is winner of the 2004 award of the Board of Trustees of the Minister of Education, Culture and Sports Prize of Music Performances for his special contribution to music in Israel.