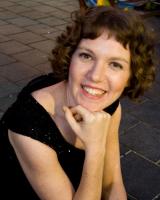 Naama Nazarathy Gordon was born in Haifa, Israel. She studied piano under Noga Dagan and Rachel Arad. She graduated with merit the music department of the Wizo-Canada highschool. At the Jerusalem Academy of Music and Dance she earned a double B.A in orchestral conducting under Yevgeny Zirlin and in voice under Marina Levitt. Naama is a founder and singer of the "Thalamus Quartet", an acapella ensemble which sings solely acapella music and specializes in carrying out madrigals from the Baroque era and modern Israeli music.
As a soloist and with the ensemble Naama appeared in numerous performances throughout the country and many of her performances were broadcasted at Kol Hamusica radio station and the Israeli public television station.
Today Naama is continuing her studies at the Jerusalem Academy of Music and Dance, towards an M.A. in Voice under Marina Levitt, and is studying composition under Slava Ganelin. In addition to her activity as a singer, and as a teacher at the Jerusalem Academy of Music and dance, she also teaches students becoming cantors their Musicianship course at the HUC – Hebrew Union College. At the Institute for External Study Programs of the Academy Naama conducts an adult choir. Last but not least Naama is married to Liran and mother of Adaya, Amichai and Ivry.