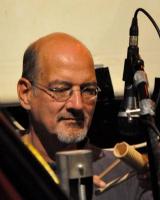 Amnon Wolman is a sound artist and composer whose work is grounded in a belief that music as an art form expresses many dissimilar ideas of beauty. He works in four arenas: sound art, performance sound-art, composition and collaborative projects.

His interest and involvement in technology and in issues of time-information guide his work alongside long-standing interests in the creative process, the relationship between a performer and an artist,and collaborations. Various performance organizations, galleries and museums present his works, and publications of some works, both audio and text, are available commercially. Among them Heinz Holliger, Charles Neidich, Ursula Oppens, Harry Sparnaay, Benny Sluchin, Ensemble Modern premiered his works, some of which were given awards at competitions such as at the Prix Ars Electronica and at the Karl-Sczuka Preis of the Südwestfunk.

Amnon Wolman is the artistic director of Ensemble Musica Nova in Tel Aviv, and is a well-regarded professor of composition. He taught at Northwestern University, The City University of New York-Brooklyn College, Tel Aviv University, and in numerous master classes and summer courses. He is currently on the faculty of the Jerusalem Academy of Music and Dance, and in the fall of 2012 he was the Schusterman Fellow at Harvard University.