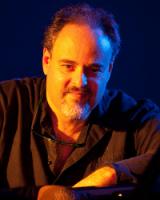 Born in Jerusalem, Rony became a member of the israeli Rock group “Duvdevan” early in his career. In 1980, Rony moved to France for five years to complete his musical studies while working as a musician. During this period , he played with a number of top musicians such as Martial Solal, Jean-Pierre Debarbat, and Jean-Loup Longnon. In 1984 he was the drummer for Monte Carlo Big Band.

After his return to Israel he played in “Overdraft”, a Jazz / Fusion band with some of Israel’s finest Jazz players. In 1986 , Rony was one of the first teachers to join the staff of what was to become the Rimon School of Jazz and Contemporary Music, where he has helped many students develop into professional musicians. Rony regularly plays in theatrical productions, chiefly at the Habima and Cameri  theaters in Tel Aviv. In 1999, he wrote music for Khalil Gibran’s masterpiece “The Prophet”.

Since 2000 Rony  is a Jazz professor in the Jerusalem Academy of Music and Dance, where he achieved a Master of Music (M.Mus).

He has also taken part in various Jazz shows at the annual Red Sea Jazz Festival in Eilat. Today, Rony performs with Yaron Gottfried Trio and plays his own music with different  musicians.

Rony wrote the music methods: “Rhythm For All” I and II, “Fifty Ways To Love Your Drumming”, “Rony Holan Teaches Drums”, “Polyrhythms For the Drum Set”, and “Rhythm For All Dictation Exercises”.