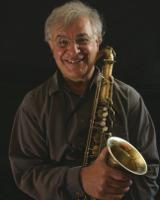 Mamelo Orpheus Gaitanopoulos, one of Israel's leading Tenor Saxophone and Trumpet players.  A gifted and most talented composer and arranger.

Born in Jerusalem, Israel. Mamelo studied piano and composition with his father, Stratis Gaitanopoulos. At the age of 17, His first professional job was with the outstanding pianist Danny Gottfried that was a great learning experience. In 1975 graduated BerkleeSchool of music, (Studied Jazz composition and arranging with the legendary Herb Poemeroy).

Resided in New York City for 16 years. Worked and recorded Three albums with "The Charli Persip Super-Band":
1) In Case You Missed It
2) No Dummies Allowed
3) Super Band
Where he was featured as a soloist and arranger composer, (Round midnight, Willow weep for me. Vital Seconds and Desert Ship).

Performed with Jack McDuff and The Mel Lewis Jazz Orchestra. Along with that, lead his nine piece band that performed at the Village Gate, The Jazz Forum, a live broadcast at the Columbia's W.K.C.R. Radio station and various jazz clubs.

In 1988 returned to Israel and took an active part in the jazz scene, leading different groups, appearing numerous times at the Red Sea Jazz Festival and The Tel-Aviv Jazz Festival. In 1997 toured India with the Danny Gottfried Quintet which performed at the Rome Jazz Festival. In 1998 he was commissioned by Dave Liebman to write a composition "Song of Thirds" for the "International Association of Jazz Schools ", where Dave Liebman and Michael Brecker Where featured in Cologne, Germany. The concert was recorded by the W.D.R. In 2001 Mamelo Lead a quintet that paid a tribute to MILES DAVIS at The Tel-Aviv Jazz Festival.

He teaches at RimonSchool for Contemporary Music and The Rubin Music Academy in Jerusalem, Israel.