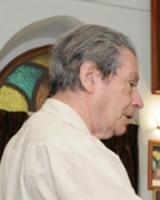 Professor Alexander Tamir was a pianist, composer, teacher and lecturer, a musical producer, known as one of the piano duo Eden-Tamir.

Alexander Tamir was born named Alik Wolkowyski in 1931 in Vilna, Poland, and began studying music at the age of 5. In 1941, when the Germans entered Vilna his family was forced to move to the ghetto. The 11 year old Alik Wolkowyski composed the song of "Ponary" on words written by his father and the poet Shmerke Kaczerginski which won a prize in a composition competition in the ghetto. The song "Ponar - Shtiler, Shtiler" became one of the symbols of the Holocaust.

Tamir was liberated in 1945 and that same year he emigrated to Israel, where he studied piano in Tel Aviv with Eliyahu Rodiakov and composition with Yitzhak Edel. He graduated from "Geula" High School. In 1948 he participated in the War of Independence.

Bracha and Alexander met in 1951 as students of Prof.Alfred Schroeder at the New Jerusalem Conservatory (now the Jerusalem Academy of Music and Dance). Their teacher was the one who encouraged them to play together, just as Artur Schnabel had with his student-assistant Alfred Schroeder.  In1955 the Eden-Tamir duo received a scholarship to participate at the Aspen Festival and study with Vronsky and Babin. Two years later they won the first prize in  the Vercelli Duo Competition in Italy.

More than 5000 performances in recitals, as soloists with orchestras, television and radio programs, festivals and concert-lectures

Eden and Tamir were the first to play outside Poland the Polish composer Witold  Lutoslawski's "Variations on a Theme by Paganini". They were the first to play and record the "Rite of Spring" by Igor Stravinsky on two pianos - an adaptation by Alexander Tamir under the guidance and with the consent of the composer. They were instrumental in promoting Israeli music and many works were written for them, including those by  Josef Tal, Haim Alexander, A.A.Boskovich, Marc Lavry, Mark Kopitman, Karel Salmon and Ari Ben Shabtai.

The first LP record of Israeli classical  music was produced in the early 60s by "Hed Arzi" with works for two pianos played by Eden and Tamir.

Their recording of Brahms' Sonata in F minor (Decca) received the Grand Prix du Disque.  They recorded for the BBC the four Brahms symphonies in the original version for two pianos by the composer.

Prof. Bracha Eden and Prof. Alexander Tamir- senior faculty members of the Jerusalem Academy of Music and Dance, taught generations of students, many of them active today  in music in Israel and abroad. They contributed greatly to the development of the Academy.  Bracha Eden served as the first Head of the Conservatory of the Academy and was Head of the Keyboard Department at the Academy. She also founded the International Friends Society of the Academy.

Alexander Tamir served as Dean of the Academy and as Head of the Piano Chair and the Piano Duo Chair.

In 1968 the Eden-Tamir duo founded the Music Center in Ein Karem-'Targ Center'- to enrich the music life in Jerusalem and to provide a platform for talents needing exposure. The center runs " Excellence Series of Young Artists - the future generation - broadcast on "the Voice of Music", concerts of new immigrants, concerts for the elderly and veteran Jerusalemites, producing CD's 'Jerusalem Artists' in collaboration with the Culture Department of the Jerusalem Municipality and the Ministry of Absorption. The Ein Karem music Center is also the home of The Israel   Chopin Society which maintains cultural relations and exchange of artists as part of  the International Federation of Chopin Societies.

The Eden-Tamir Music Center hosts as well "The Voice of Music Young Artist Competition" - in cooperation with the Jerusalem Symphony Orchestra and The Israel Broadcasting Authority.

To date, the Center hosts young artists – the future generation, new immigrants, and international and local artists in weekly concerts of which some of them are broadcast live on the "Voice of Music". Concurrently, Alexander Tamir has been and still is the editor of  programs on the "Voice of Music", the Israel Broadcasting Authority.

The Eden-Tamir duo lasted for over 59 years until Bracha Eden's death in 2006.