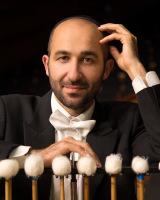 Dan Moshayev became Principle Timpanist of the Israel philharmonic orchestra in 2004, when he was only 18 years old. He began studying percussion with his father, Joseph Moshayev, and at the same time also studied clarinet. In 1990 he immigrated with his family to Israel, and in 1999 he began studying percussion with Mr. Alon Bor. Dan is a graduate of the Thelma Yelin high school for the Arts. He served as an outstanding musician in the army. In 2003-2010 he was Principle Timpanist of the West-Eastern Divan Orchestra, directed by Daniel Barenboim.

He appeared with the Toscanini Symphony Orchestra conducted by Lorin Maazel. He appeared with his brother, Mark Moshayev in a percussion duo, including a solo performance with the Israel philharmonic orchestra. In 2004, the duo won first prize at the Buchmann- Mehta school competition. Dan appeared as a Timpani soloist with the Israel Philharmonic orchestra several times. Member of Multi Piano & Multi Percussion group. In addition to playing in the IPO, Dan also Teaches percussion and timpani. Gives muster classes and is a juror in auditions for the Buchmann- Mehta School of music and American Israel Culture Foundation Scholarship.

Dan is an active chamber musician and has collaborated with the best artists in the world. Dan has played under the baton of renowned conductors including including Zubin Mehta, Daniel Barenboim, Pierre Boulez, Riccardo Muti, Kurt Masur, Christoph von Dohnanyi, Valery Gergiev, Rafael Frühbeck de Burgos, Helmuth Rilling, Yuri Temirkanov and many more.

Dan is a presenter of a Hardtke Timpani.

Dan is married to Eden and father of Benjamin, Naftali and Shmuel.

Related Links:
Dan in the Israel Philharmonic Orchestra
Dan in the Hardtke Timpani website
Add This: